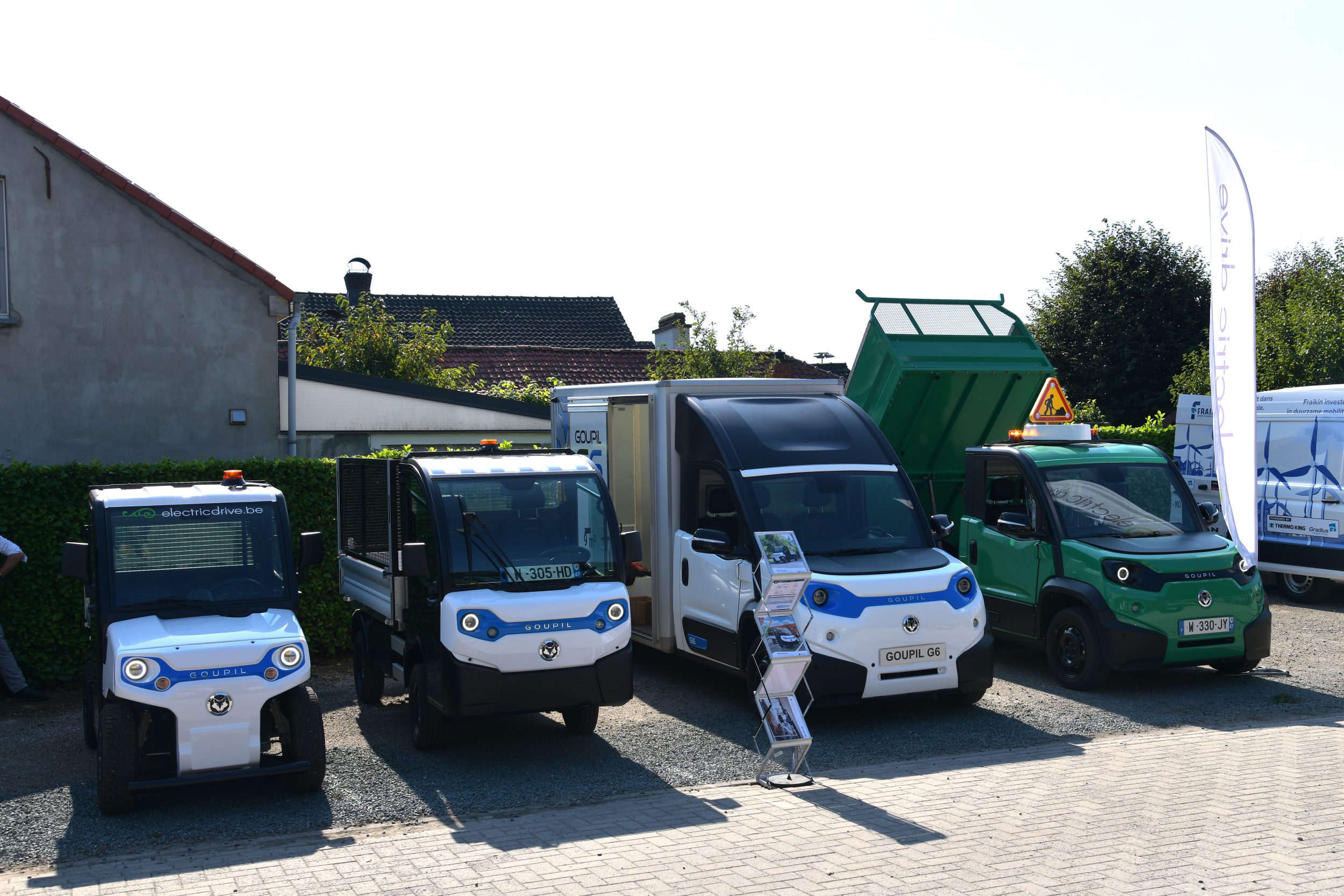 June 2019- The first two Maxus EV80 H3 vans were delivered to the Commune of Anderlecht. Both vehicles have been equipped with hard board floors and lightweight paneling to protect the interior. We also added Rhino ImpactSteps at the back and an LED Traffic master on the roof and LED’s in the front grille.

The sturdy new G2 will be offered with a closed box or open bed.

March 2019- The maintenance crew now uses a  G4 as mobile tool-box for service and repairs inside its facilities. Its compact dimensions and short turning radius make the G4 the perfect tool for this.

March 2019- The Goupil G4 will from now on be available with a longer chassis. The G4-L will only be available in a N1 homologated version with Lithium batteries.

March 2019- Two G1’s equipped by HAMER TECHNICS are used for oil collecting and refilling. Another G1 equipped with non-marking tires is used in the warehouse.

October 2018- City of Ghent puts two Goupil G4 in service for spraying brine on the bicycle lanes. The Goupils have been equipped with winter tires, coated chassis, large mudguards,  Webasto heaters and double DC/DC converters. The HillTip brine sprayers are powered directly from the traction batteries.

Check out the video here: https://youtu.be/qbXDsc64NZA

June 2018– Maxus is increasing its network of retail partners as it prepares to launch the brand in Europe in 2019. The new partnerships will allow Maxus to accelerate delivery of its electric EV80 vans.

Deliveries of the EV80 to Europe commenced earlier this year, with Maske GmbH appointed to support operations in Germany and Austria. The latest official retail partners to be announced are Electric Drive bvba in Belgium and Plan-net Solar in Slovenia, while a direct distribution model has been introduced for deliveries to the Netherlands.

Each retailer benefits from skilled technicians, specifically trained to service and maintain the EV80 from SAIC Mobility Europe, a division of China’s largest and oldest vehicle manufacturer, SAIC.

SAIC Mobility Europe (SME) is responsible for introducing a range of SAIC brands (MG, Rover, Maxus), products and services into Europe in the coming years. The fleet division is making the Maxus EV80 available to more than 200 major fleet operators in Europe, with new retail partners in Norway, Sweden, Denmark, Italy, France and Spain due to be announced shortly.

UPDATE 01/01/2020: the distribution of Maxus for Belgium and the Netherlands is no longer provided by SME. As result, Maxus is no longer available through Electric Drive BV.

Januari 2017 – Electric Drive bvba has been responsible for GOUPIL electric vehicles in Belgium since 2007 and has now been appointed as exclusive distributor for the complete range of POLARIS Work & Transportation. This includes leading brands like GOUPIL, GEM & TAYLOR-DUNN and also the electric range utility vehicles from MEGA-AIXAM.